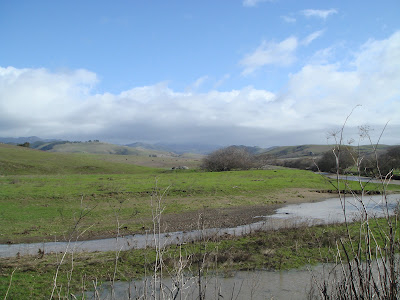 BLOWING EAST
Gale winds blow the most recent storm toward the east, bringing fresh Pacific air. It reminds me I omitted politics in an earlier post about the value of fresh ideas and new waves.  Thomas Friedman notes an example of the all too rare politician with a sense of innovation and creativity-Kasim Reed, Mayor of Atlanta.  Reed has built the city surplus, put a check on runaway pension entitlements, improved infrastructure and recreation in blighted areas, put more police on duty and enjoys a 70% popularity rating.  He's managed Atlanta with a practical frugality and commitment to finding new ways to solve old problems.
Other cities and towns with pending pension crunches would be advised to study Reed's success.  Even our little village of Cambria faces the problem.
ANOTHER STEWART ECHO
In a previous post we hailed Jon Stewart for prompting a modicum of intelligence from  the GOP on the issue of the 9/11 Responders Health Care.  He is getting more serious and more widely read acknowledgement.
Read it here:
And that adds a nice quality to this- 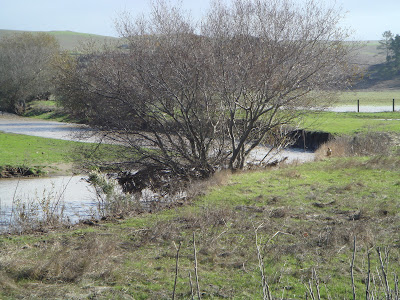 If you look closely at the right bank, near the tree you will
see what I think is an Eagle.  Here is a blow up-

Sorry it is pixilated.  Let us know if you can make a more
certain identification.  I got the shot in an area where
Eagles have been previously sighted. But we also
have a number of Hawks in the area as well.
THIS IS THE FAR WEST 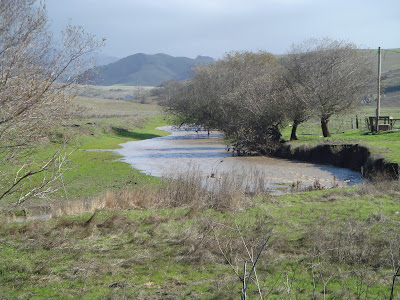 We've had 10 inches of rain since 7 December and more than
14 inches this rainy season, so the old creek beds are
have come back to life.  Cattle are grazing on
Western slopes and in the highland valleys.
Which brings us to REEL THOUGHTS 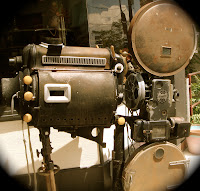 TRUE GRIT
This is a good film and it takes the Old West genre to a new level. That is to be expected when you consider the film making quality of the Coen brothers.  The film has the look and feel of the old west, so from the start it's got  grit. You can almost smell the body odor and taste the dirt.  Bridges scores again with another characterization that earns the label of Classic.  Damon's Texas ranger is brilliant.  He must have loved playing the role.
And as many others have said Hailee Steinfeld is just incredible and without her great work the other great performances would have meaningless.  Brolin and Pepper were also terrific in their smaller roles.
BIRDS AND BEES 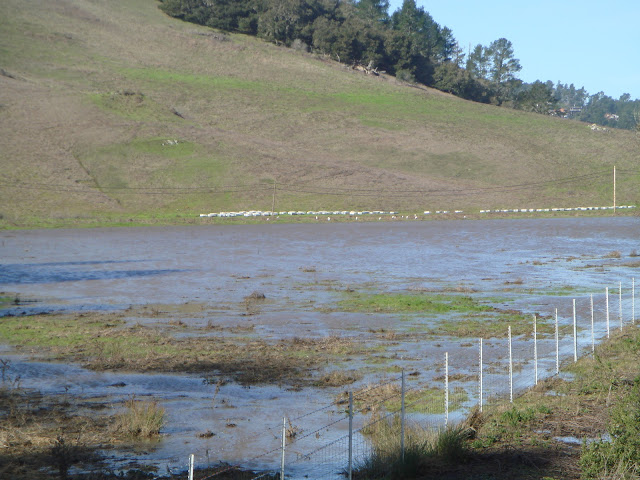 Really!  That white line on the far side of the wet land is a combination of Egrets and beehives.  The Egrets seemed to be tucking into the hill side to avoid the gale winds. 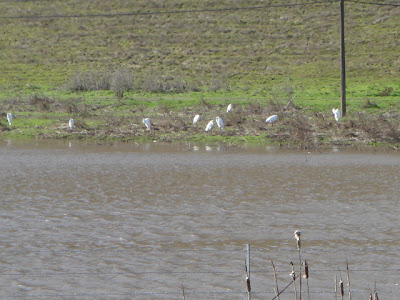 It is a picture of hunting.  The Egrets are feeding on creatures below them in the food chain.  And in a circular logic, I'll close with a thought continued from the comment about the need for fresh ideas.
The Economic Policy Institute reports American companies created 1.4 million new jobs this year, overseas.  In the United States those companies created less than a million new jobs.  Hmmm, something about the food chain seems to rattle around in this statistic.
Posted by Tom Cochrun at 6:11 PM