Adventure in the Pacific

The surf and warm sun had worked me toward a meditative trance when a flash of red, ripping through my view had me ambling for the camera. 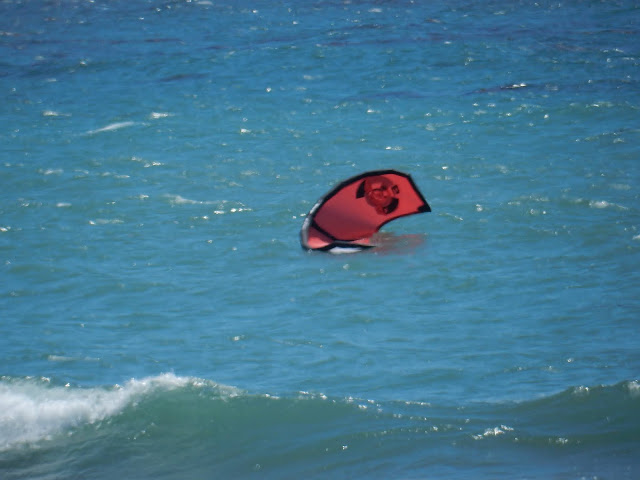 The kite surf rig was in free drift. We had noticed a couple aloft just up Highway 1 north of where we parked to walk across a bench of land to the beach.

In a moment I saw the rest of the gear, the pilot, ocean swimming in a steady surf. I thought he must be exhausted as he alternated between a back stroke and breaststroke. We wondered if we should alert beach rescue as we trained our attention on him. 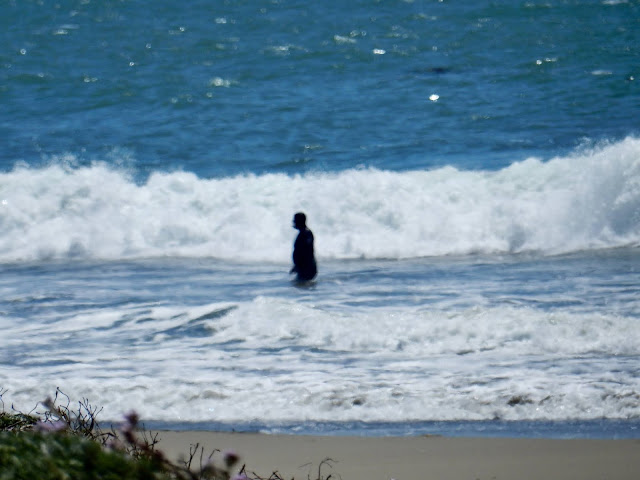 He stood up, saw his rig traveling south in a stiff breeze so it was back into the swim. 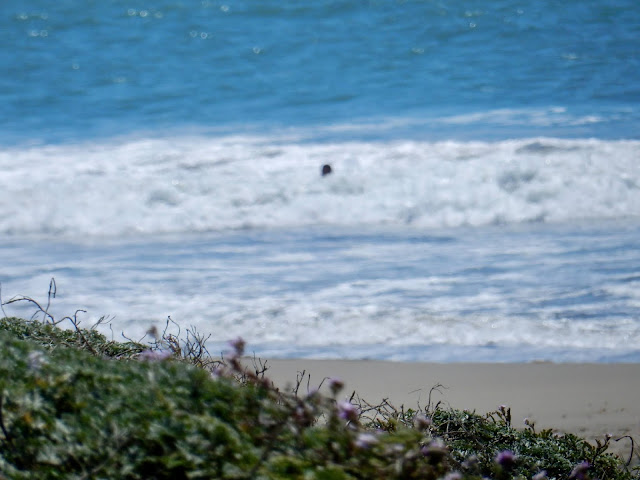 He caught a kind of break- the rig was headed toward a cove further south. 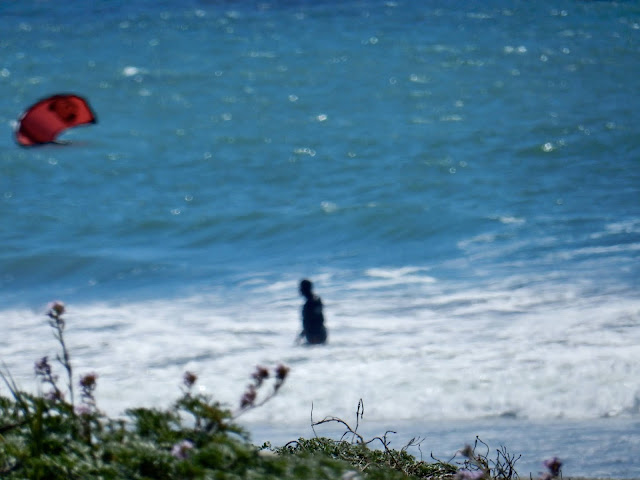 He was able to walk the shore watching as the gear moved toward a landing. What he may not have expected was playing the game of chase amongst a few elephant seals snoozing on the shoreline. 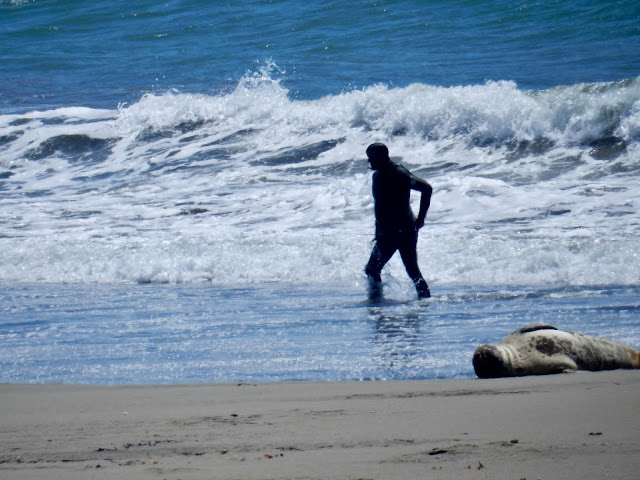 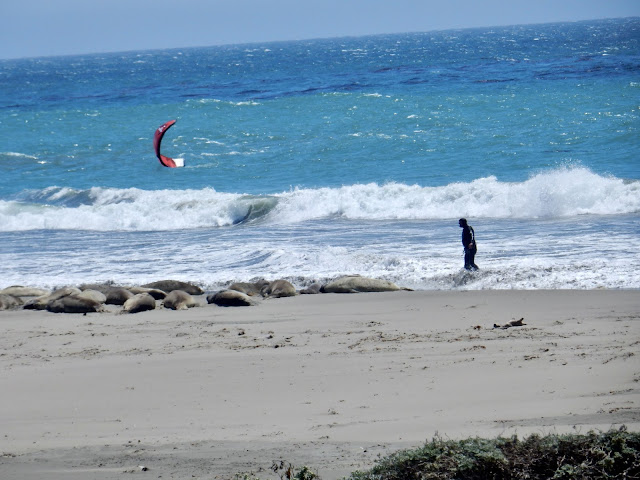 I thought he must be drained. Keeping the kite aloft while surfing would be demanding enough. The extra output of ocean swimming and then a long beach walk may have been more than he bargained for.
The frame below is from his relative position as he came ashore. The rig was heading for the cove at the end of the beach in this shot. 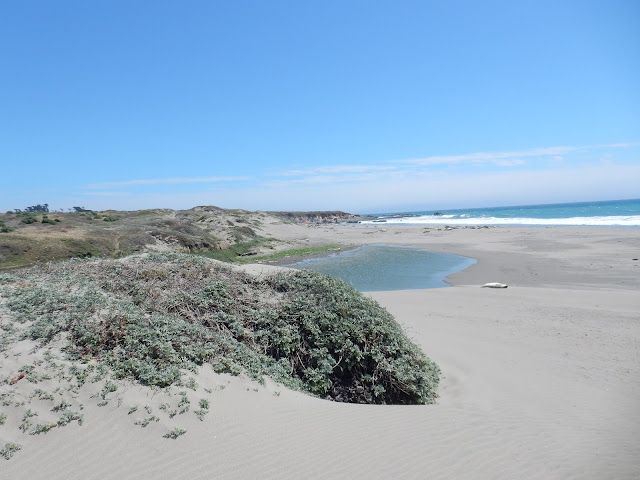 If you look carefully you can see it nestled to the left of the frame below. 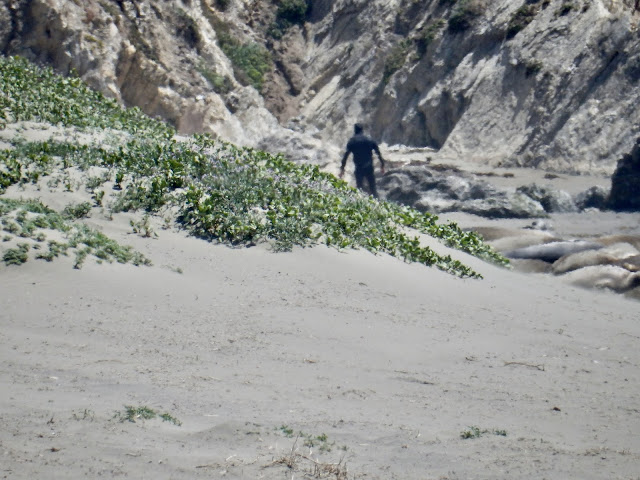 Below he has his back to one of the larger elephant seals who is letting loose with one of their snort roars. 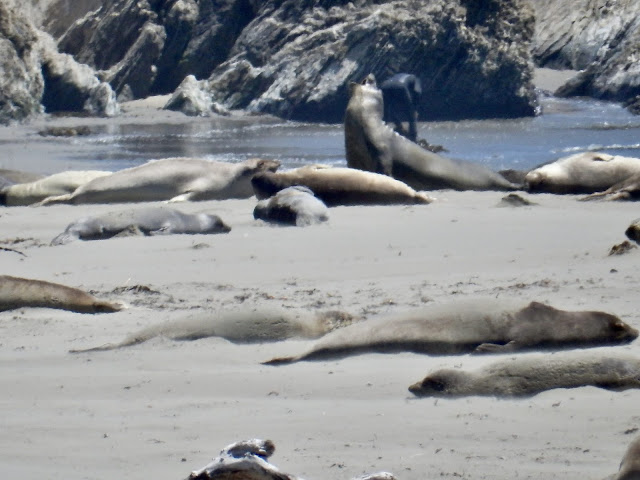 Sorry for the soft resolution and fuzziness of the shot, but it places the red rig in the collection of molting elephant seals.
In the frame below you see him at the far right retrieving something. 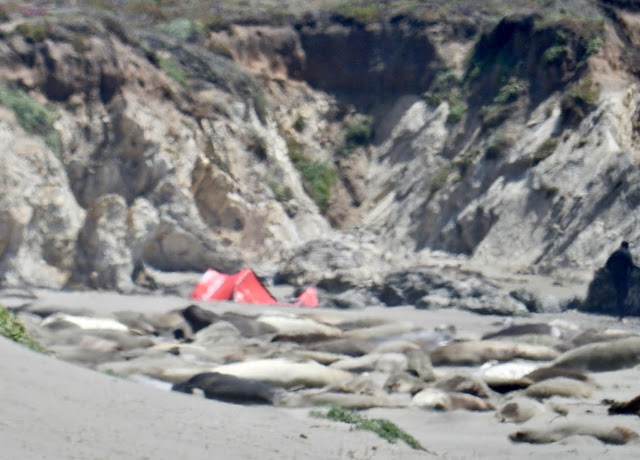 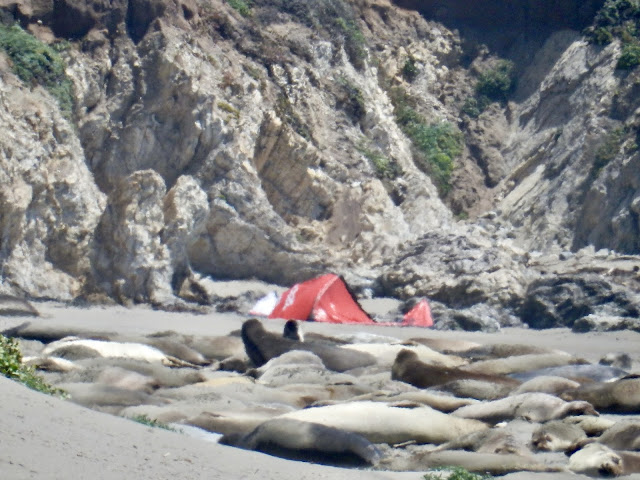 In the shot above a couple of the elephant seals appear to be taking an interest in that new red visitor to their domain.

I was trying to decide what to do as we hiked back to our car, thinking I'd drive up to where I had seen the other rigs.

We met a guy in a wet suit heading toward the beach. He said he was there to help a friend. I told him we had been a bit worried as his buddy had been stroking and chopping hard in the surf.

"That's a lot of hard work for a sport" I said.  He just chuckled as he continued his long hike.

I suspect the story will be told a few times.